Aisne 1914: The Dawn of Trench Warfare 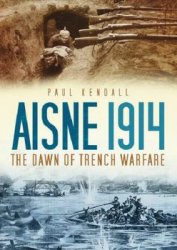 The Battle of the Aisne fought during September 1914 was a savage engagement and a complete shock for the soldiers of the British Expeditionary Force who were trained to fight mobile wars. When they reached the north bank of the Aisne the "Old Contemptibles" would be stopped by the Germans entrenched on high ground armed with machine guns, supported by heavy artillery. The allied commanders would naively send their troops into futile assaults up exposed slopes, devoid of cover to attack the German lines dug into positions on the ridges along the Chemin des Dames and concealed by woodland.