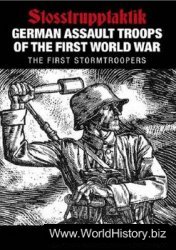 To many it would later seem as if the rule book of war had been torn up and thrown away. World War I is usually characterized as a static war of attrition, but by its end a new doctrine of fire and movement emerged, with the squad as the key tactical unit, marking a fundamental shift in methods of warfare. As late as March 1918, assault detachments used these tactics to destroy the British 5th Army and take 50,000 prisoners. Stephen Bull traces the development of German storm tactics in the context of trench warfare waged with new technology: vastly improved machine-guns, super-heavy artillery, flamethrowers, and gas. The legend of German stormtroops has proved powerful and enduring. They were central to Blitzkrieg, and Hitler styled them as elite soldiers—living examples of Nietzschean supermen. As demonstrated here, these tactics did not appear out of nowhere.