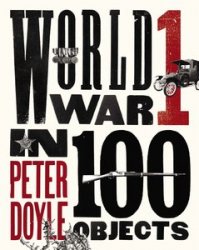 A dynamic social history commemorating the 100th anniversary of the start of World War I. General readers and history buffs alike have made bestsellers of books like A History of the World in 100 Objects. In that tradition, this handsome commemorative volume gives a unique perspective on one of the most pivotal and volatile events of modern history. In World War I in 100 Objects, military historian Peter Doyle shares a fascinating collection of items, from patriotic badges worn by British citizens to field equipment developed by the United States. Beautifully photographed, each item is accompanied by the unique story it tells about the war, its strategy, its innovations, and the people who fought it.