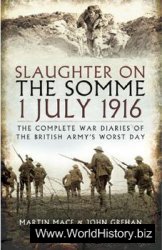 At 07.30 hours on 1 July 1916, the devastating cacophony of the Allied artillery fell silent along the front on the Somme. The ear-splitting explosions were replaced by the shrill sound of hundreds of whistles being blown. At that moment, tens of thousands of British soldiers climbed out from the trenches on their part of the Western Front, and began to make their way steadily towards the German lines opposite. It was the first day of the Battle of the Somme.