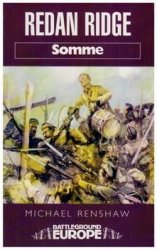 The fighting on Redan Ridge in 1916 has long been overshadowed by events on each flank, namely Serre on the left and Beaumont Hamel on the right. On 1 July 1916 the sector was occupied by the 4th Division, made up of some of the veteran regular battalions, the 'Old Contemptibles', although few of the original members had survived thus far. It was mainly Territorials and' new army' men who fought here. A special feature includes little known accounts of events at the Quadrilateral on that fateful day. The November battles involve the 2nd Division and the 32nd Division and include the struggle across the mud to Beaumont trench, Frankfurt and Munich trenches. Biographical details of some of the famous men who took part, such as H H Munroe, the author 'Saki' and A A Milne, creator and author of Winnie the Pooh, are also included.