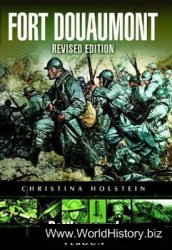 This fully revised second edition of Christina Holstein's acclaimed Battleground guide to Fort Douaumont will be essential reading for students of the Battle of Verdun, for visitors to the battlefield, and for anyone who is interested in the history of twentieth-century fortifications.The battle, which lasted from 21 February to 15 December 1916, was a turning point in the First World War, and Fort Douaumont was at the heart of it. In 1914 the fort was the strongest and most modern of the fortifications around Verdun and it formed the keystone of the French defense in the area.