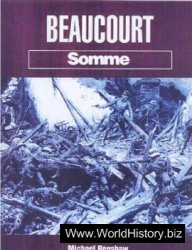 Beaucourt is one of the last parts of the Battle of the Somme still to be covered, until now, by the splendid Battleground Europe Series. It was also one of the last actions of the Battle of the Somme, 1916.The eventual capture of Beaucourt along with Beaumont Hamel forced the Germans to retreat to their new defensive position known as the Hindenburg Line. Readers are taken on a voyage of discovery through the village of Beaucourt and along the banks of the Ancre in the direction of Cambrai.