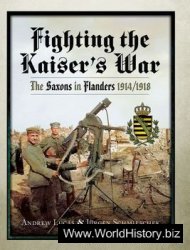 Personal accounts of the Great War experiences of British soldiers are well known and plentiful, but similar accounts from the German side of no man's land are rare. This highly original book vividly describes the wartime lives and ultimate fates of ten Saxon soldiers facing the British in Flanders, revealed through their intimate diaries and correspondence. The stories of these men, from front-line trench fighters to a brigade commander, are in turn used to illustrate the wider story of thousands more who fought and died in Flanders 'for King and Country, Kaiser and Reich' with the Royal Saxon Army. This ground-breaking work is illustrated with over 300 mostly unseen wartime photographs and other images, recording the German experience of the war in human detail and giving a rounded picture of how the Saxons lived and died in Flanders.