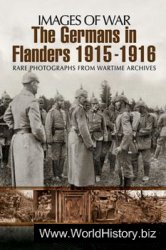 The book covers the actions of the German Army in the Low Countries during 1915 and 1916. In its broad compass it looks at the battles with the French, Belgians and British, concentrating mostly on the latter. Both 1915 and 1916 were very active years for the Central Powers and the Allies. After a quiet start with minor fighting April 1915 saw gas attacks against Hill 60, followed by 2nd Ypres and intermittent attacks throughout the remainder of the year.