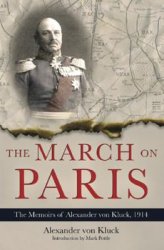 Von Kluck saw active military service at an early age during the Seven Weeks' War of 1866 and, in 1870-71, the Franco-Prussian War. Rising through the army, he became inspector general of the Seventh Army District in 1913. During the First World War von Kluck commanded the German First Army, notably in the Schlieffen Plan offensive against Paris at the start of the war in August 1914.