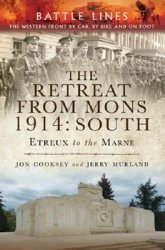 The Retreat from Mons 1914: South is the second volume in Pen & Sword’s Battle Lines series to cover the opening campaign of the Great War. It is the essential companion for every visitor who is keen to retrace the path taken by the British Expeditionary Force immediately after the outbreak of the conflict – all the important battle sites of the second stage of the retreat are featured here. Expert guides Jon Cooksey and Jerry Murland take visitors over a series of routes that can be walked, biked or driven, explaining the fighting that occurred at each place in vivid detail. They describe what happened, where it happened and why and who was involved, and point out the sights that remain for the visitor to see.