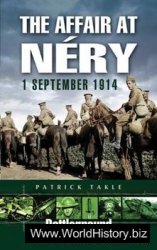 Early on 1 September 1914, the Germans surprised 1st Cavalry Brigade harbouring in the little town of Nery. Their initial bombardment caused chaos and destruction and the British took time to organize themselves. The actions of two batteries of the Royal Horse Artillery were eventually so successful that even today there is a battery known as Nery Battery RHA. The Queen's Bay's a cavalry regiment, charged in classic style and the Germans, who mistakenly thought they were out numbered, withdrew with heavy casualties. Of the three VCs, two were posthumous. While a small engagement by later Great War standards, Nery is a classic case study of an artillery duel and cavalry action.