Battlefield Medicine: A History of the Military Ambulance from the Napoleonic Wars Through World War I 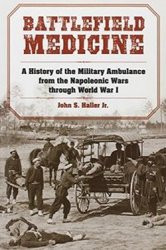 In this first history of the military ambulance, historian John S. Haller Jr. documents the development of medical technologies for treating and transporting wounded soldiers on the battlefield. Noting that the word ambulance has been used to refer to both a mobile medical support system and a mode of transport, Haller takes readers back to the origins of the modern ambulance, covering their evolution in depth from the late eighteenth century through World War I.

The rising nationalism, economic and imperial competition, and military alliances and arms races of the nineteenth and early twentieth centuries figure prominently in this history of the military ambulance, which focuses mainly on British and American technological advancements. Beginning with changes introduced by Dominique-Jean Larrey during the Napoleonic Wars, the book traces the organizational and technological challenges faced by opposing armies in the Crimean War, the American Civil War, the Franco-Prussian War, and the Philippines Insurrection, then climaxes with the trench warfare that defined World War I. The operative word is "challenges" of medical care and evacuation because while some things learned in a conflict are carried into the next, too often, the spasms of war force its participants to repeat the errors of the past before acquiring much needed insight.

More than a history of medical evacuation systems and vehicles, this exhaustively researched and richly illustrated volume tells a fascinating story, giving readers a unique perspective of the changing nature of warfare in the nineteenth and early twentieth centuries.