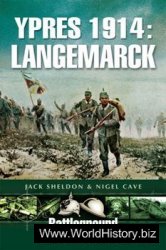 These three Battleground Europe books on Ypres 1914 mark the centenary of the final major battle of the 1914 campaign on the Western Front. Although fought over a relatively small area and short time span, the fighting was even more than usually chaotic and the stakes were extremely high. Authors Nigel Cave and Jack Sheldon combine their respective expertise to tell the story of the men – British, French, Indian and German - who fought over the unremarkable undulating ground that was to become firmly placed in British national conscience ever afterwards.