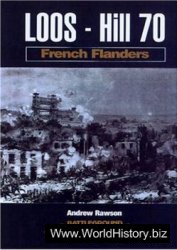 The Battle of Loos formed part of a wider offensive conducted by both French and British Forces in September 1915. The British First Army, under the leadership of General Haig, were to break through the German line at Loos thanks in part to their superior numbers, while other operations were to achieve a similar result in Champagne and at Vimy Ridge.Due to lack of artillery the Loos attack was planned to be preceded by a massive gas attack. Chlorine gas would hopefully entirely overcome the Germans' inadequate gas masks and lead to a swift breakthrough.Unfortunately all did not go to plan. First some of the gas was blown back into the British trenches causing over 2,000 casualties.