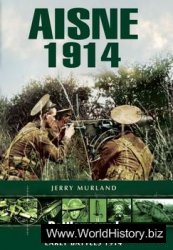 The 1914 Battle of the Aisne, officially from 12 - 15 September, came about as a result of the German retirement from the Battle of the Marne, which took place further south as the huge conscript armies of France and Germany jostled for position almost within sight of Paris. By the time the British arrived on the Aisne, the battle line stretched some 150 miles from Noyon in the west to Verdun in the east and it was only along a tiny fifteen-mile sector in the middle that The British Expeditionary Force was engaged. However, it fought bitter engagements, which took place in difficult conditions and casualties were heavy. The Aisne fighting was the final attempt by the allies to follow through from the success of the Marne. It also marked the successful establishment by the Germans of a sound defensive line on this part of the front.