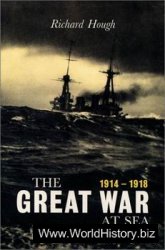 Mr Hough's account of the Sea War of World War I is masterful retelling of a subject that is not without controversy. His premise that the naval war between Great Britain and the German Empire was THE deciding factor of the Great War is supportable even if the reader might be hesitant to accept it. He opens a different view that addresses just about everything the naval historian can conjur up from dreadnaught design to internal politics in London and Berlin at a time when the USA could hardly be considered a significant military power, particularly at sea. Of particular interest if his examination of how the Royal Navy, torn by outdated traditions and political infighting, plagued by somewhat unimaginative officers, continued to rule the waves and provide the greatest Fleet victory since Trafalgar over the German High Seas Fleet. Anyone with an interest in World War I, seapower, or general naval history can't go wrong with this book.