A Mad Catastrophe: The Outbreak of World War I and the Collapse of the Habsburg Empire 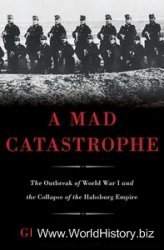 Author: Geoffrey Wawro
A Mad Catastrophe: The Outbreak of World War I and the Collapse of the Habsburg Empire
Basic Books
ISBN: 0465028357
2014
Format: EPUB
Size: 4,1 МБ
Language: English
Pages: 472
The Austro-Hungarian army that marched east and south to confront the Russians and Serbs in the opening campaigns of World War I had a glorious past but a pitiful present. Speaking a mystifying array of languages and lugging outdated weapons, the Austrian troops were hopelessly unprepared for the industrialized warfare that would shortly consume Europe.
As prizewinning historian Geoffrey Wawro explains in A Mad Catastrophe, the doomed Austrian conscripts were an unfortunate microcosm of the Austro-Hungarian Empire itself—both equally ripe for destruction. After the assassination of the Austrian Archduke Franz Ferdinand in June 1914, Germany goaded the Empire into a war with Russia and Serbia. With the Germans massing their forces in the west to engage the French and the British, everything—the course of the war and the fate of empires and alliances from Constantinople to London—hinged on the Habsburgs’ ability to crush Serbia and keep the Russians at bay. However, Austria-Hungary had been rotting from within for years, hollowed out by repression, cynicism, and corruption at the highest levels. Commanded by a dying emperor, Franz Joseph I, and a querulous celebrity general, Conrad von Hötzendorf, the Austro-Hungarians managed to bungle everything: their ultimatum to the Serbs, their declarations of war, their mobilization, and the pivotal battles in Galicia and Serbia. By the end of 1914, the Habsburg army lay in ruins and the outcome of the war seemed all but decided.
Drawing on deep archival research, Wawro charts the decline of the Empire before the war and reconstructs the great battles in the east and the Balkans in thrilling and tragic detail. A Mad Catastrophe is a riveting account of a neglected face of World War I, revealing how a once-mighty empire collapsed in the trenches of Serbia and the Eastern Front, changing the course of European history.