For Love and Courage: The Letters of Lieutenant Colonel E.W. Hermon from the Western Front 1914--1917 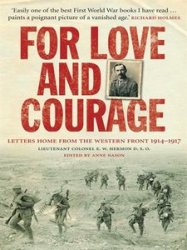 Author: E. W. Hermon
For Love and Courage: The Letters of Lieutenant Colonel E.W. Hermon from the Western Front 1914--1917
Preface Publishing
ISBN: 1848090390
2009
Format: EPUB
Size: 7,2 МБ
Language: English
Pages: 384
Lt Colonel E.W. Hermon died in a hail of bullets on the 9th April 1917, the first day of the Battle of Arras, leading his men of the 24th Battalion Northumberland Fusiliers into the attack. Like hundreds of thousands of others in the Great War, he gave his life for his King and country. He was shot through the heart, one bullet slicing through the papers in his top pocket, including the four-leaf clover his wife had given him for good luck. His final words to his Adjutant were 'Go on!' before he sank to his knees and died almost instantaneously. He was carried from the battlefield by his faithful soldier servant, Buxton, and now lies buried in the Commonwealth War Graves Cemetery at Roclincourt, three miles from Arras. This could have been the end of the story but he left a testament of his life and ideals in a unique and hitherto unknown and unpublished collection of long and detailed letters he wrote to his darling wife and his children, 'the Chugs'. Now, nearly a century after his death, he speaks to us of a past, less cynical life, where selflessness, honour, duty and courage were admired above all else. His own courage was officially recognised as he was mentioned in despatches three times and posthumously awarded the D.S.O. The letters have been transcribed and edited by Hermon's granddaughter Anne Nason with the guidance and historical advice of James Holland, the distinguished historian and writer. Peter Caddick-Adams, who works alongside Richard Holmes at Cranfield University, believes the letters to be unique in their candour and context since Hermon was Battalion Commander and thus his letters were not censored.