The Seafarers - The Dreadnoughts 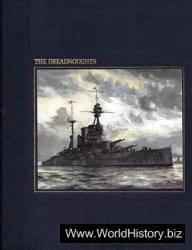 "The Dreadnoughts," a volume in "The Seafarers" series put together by Time-Life, begins with the review of the British fleet at Spithead in 1897 and ends with the aftermath of the Battle of Jutland (known in Germany as the Battle of the Skagerrak). This was the largest naval engagement of World War I and the only one to involve battleships on a large scale. Fought May 31-June 1 1916 in the North Sea, the Royal Navy's Grand Fleet, commanded by Admiral John Jellicoe, faced the Kaiserliche Marine's High Seas Fleet, commanded by Vice Admiral Reinhard Scheer. Knowing that the Battle of Jutland is the climax of this volume puts the rest of this look at the Dreadnoughts in perspective. The lessons of the Battle of Tsushima during the war between Russia and Japan in 1905, where long-range fire decided the outcome, were not lost on the British Admiralty. The result was the creation of the H.M.S. "Dreadnought," a radical design that heralded the start of an epic naval arms race of battleships between Great Britain and Germany, the United States and Japan over the first four decades of the 20th century. Although she never fired her guns in battle and her only action during World War I was to ram and sink a German U-boat in the North Sea, "Dreadnought" was a pivotal ship in naval history because she was so far advanced that every battleship that came after her embodied her basic concept. Before her, all battleships had a main battery of four guns. The "Dreadnought" had ten, although it could fire only eight in a broadside, and it was bigger and faster than any of her predecessors.