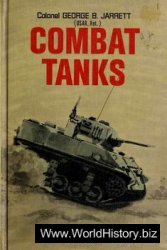 Since World War I, tanks have been a crucial weapon of modern warfare . The great tanks - and the great tank battles - have made modern history. This is a picture history of the military tank - one of the most extraordinary military vehicles ever built. Here are rare photographs - taken from private files that were built up over a period of forty years - of every major tank the world's military powers have used since Britain's first experimental, "Little Willie." Many are action shots, actually taken in battle by one of the authors. Others are official photos of captured enemy tanks from four wars.