Collision of Empires: The War on the Eastern Front in 1914 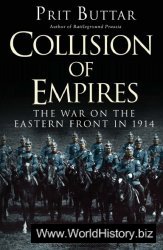 Although the myriad of alliances and suspicions that existed between the Russian, German, and Austro-Hungarian empires in the early 20th century proved to be one of the primary triggers for the outbreak of the First World War, much of the actual fighting between these three nations has been largely forgotten in the West. Whilst battles such as Ypres, the Somme, and Passchendaele have been inscribed deeply on the public consciousness, with the exception of perhaps Tannenberg, the conflicts in the East do not hold the same recognition.