Handbook Of The German Army In War. January 1917 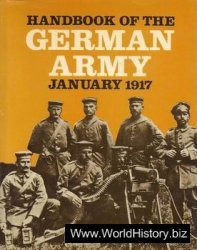 This work was compiled by British Military Intelligence and is part of a series that brings together an overview of the state of the German Army at the period preceding the armistice. It existed in at least two earlier editions from January 1917 and April 1918. The work covers many aspects of the German army including training, mobilisation, command and organisation, weapons, signals, transportation, medical and veterinary services and uniforms. This handbook would have informed the perception of the German army from a British perspective in the years following the war.