The Unfinished Peace after World War I: America, Britain and the Stabilisation of Europe, 1919-1932 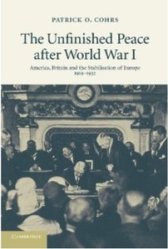 Author: Patrick O. Cohrs
The Unfinished Peace after World War I: America, Britain and the Stabilisation of Europe, 1919-1932
The Cambridge University Press
2006
ISBN: 0521853532
Format: PDF
Size: 5,6 МБ
Language: English
Pages: 708
This is a highly original and revisionist analysis of British and American efforts to forge a stable Euro-Atlantic peace order between 1919 and the rise of Hitler. Patrick Cohrs argues that this order was not founded at Versailles but rather through the first 'real' peace settlements after World War I - the London reparations settlement of 1924 and the Locarno security pact of 1925. Crucially, both fostered Germany's integration into a fledgling transatlantic peace system, thus laying the only realistic foundations for European stability. What proved decisive was that key decision-makers drew lessons from the 'Great War' and Versailles' shortcomings. Yet Cohrs also re-appraises why they could not sustain the new order, master its gravest crisis - the Great Depression - and prevent Nazism's onslaught. Despite this ultimate failure, he concludes that the 'unfinished peace' of the 1920s prefigured the terms on which a more durable peace could be founded after 1945.