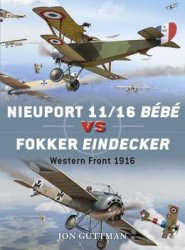 The appearance in July 1915 of the Fokker E I heralded a reign of terror over the Western Front that the Allies called the ‘Fokker Scourge’. The French Nieuport 11 was one type desperately thrown into action to counter the Fokkers. The swirling dogfights between this fighter – and its more powerful but more unwieldy stablemate, the Nieuport 16 – and a succession of improved Fokkers, the E II, E III and E IV, came to symbolise air combat in World War I.