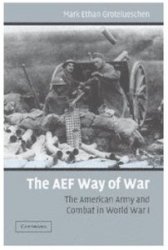 Author: Mark Ethan Grotelueschen
The AEF Way of War The American Army and Combat in World War I
Cambridge University Press
2006
ISBN: 0521864348
Format: PDF
Size: 5,0 МБ
Language: English
Pages: 398
This book provides the most comprehensive examination of American Expeditionary Forces (AEF) combat doctrine and methods ever published. It shows how AEF combat units actually fought on the Western Front in World War I. It describes how four AEF divisions (the 1st, 2nd, 26th, and 77th) planned and conducted their battles and how they adapted their doctrine, tactics, and other operational methods during the war. General John Pershing and other AEF leaders promulgated an inadequate prewar doctrine, with only minor modification, as the official doctrine of the AEF. Many early American attacks suffered from these unrealistic ideas that retained too much faith in the infantry rifleman on the modern battlefield. However, many AEF divisions adjusted their doctrine and operational methods as they fought, preparing more comprehensive attack plans, employing flexible infantry formations, and maximizing firepower to seize limited objectives.