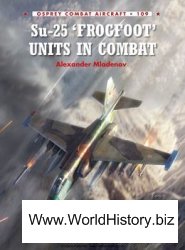 
This volume details the technical features and operational performance of the Soviet Su-25 'Frogfoot', which proved itself as a durable and versatile attack aircraft in a variety of theatres such as Afghanistan, Georgia and Ossetia. Today it is widely accepted as the true successor to the types of specialised ground--attack aircraft that emerged during World War II. This book illuminates the service history of the 'Frogfoot' in over 30 years of combat using first-hand accounts and revealing archive photographs. The awkward-looking Su-25 has often been underrated, but the faithful 'Frogfoot' is now slated to remain in service with most of its current operators across the globe until at least 2020.