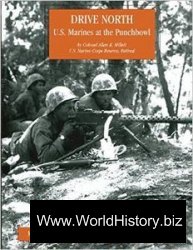 Author: Allan Reed Millett
Drive North: U.S. Marines at the Punchbowl
Pickle Partners Publishing
ISBN: 148207110X
2013
Format: PDF
Size: 11,1 МБ
Language: English
Pages: 68
Includes over 30 maps, photos and illustrations
The Battle of the Punchbowl, was one of the last battles of the movement phase of the Korean War. Following the breakdown of armistice negotiations in August 1951, the United Nations Command decided to launch a limited offensive in the late summer/early autumn to shorten and straighten sections of their lines, acquire better defensive terrain, and deny the enemy key vantage points from which they could observe and target UN positions. The Battle of Bloody Ridge took place west of the Punchbowl from August–September 1951 and this was followed by the Battle of Heartbreak Ridge northwest of the Punchbowl from September–October 1951. At the end of the UN offensive in October 1951, UN Forces controlled the line of hills north of the Punchbowl.