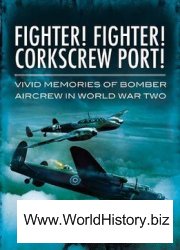 Author: Pat Cunningham
Fighter! Fighter! Corkscrew Port!: Vivid Memories of Bomber Aircrew in World War Two
Pen and Sword
ISBN: 184884655X
2012
Format: EPUB + PDF (conv)
Size: 6,4 МБ + 6,2 МБ
Language: English
Pages: 256
The young men who flew with RAF Bomber Command in World War Two were a complex mixture of individuals but they all shared the gift of teamwork. A crew of seven may have comprised all non-commissioned men and some crews included commissioned officers but not always flying as pilots. The outstanding fact was that each man relied on every other member of his crew to return from each mission safely.This book contains ten intriguing reminiscences of bomber aircrew; some were pilots, others navigators, flight engineers, bomb-aimers or gunners. They flew as both commissioned or NCO airmen. Understandably, a common problem was that of coping with fear. Many former aircrew hold that anyone who claims to have felt no fear on operations is either lying or has allowed the years to blank out that fear. But there are a few who do maintain that they never felt afraid. For the majority, though, handling fear was something to be worked out by the individual. Some hit the bottle, others womanized to excess; others tightened the gut and bit the lip; or drew the curtain and focused upon the plotting table or the wireless set. The passing years may have silvered what hair remains, dulled the eye that formerly registered on the merest speck; lent a quiver to the hand that once controlled the stick, penciled in the track, manipulated the tuning dial, set the bombsight, tapped the gauge, or rotated the turret. And yet for all the attributes of age their irrepressible youthfulness shines through.