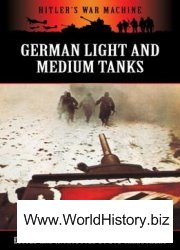 Author: Bob Carruthers
German Light and Medium Tanks (Hitler's War Machine)
Coda Books Ltd
2012
Format: EPUB
Size: 3,9 МБ
Language: English
Pages: 192
This comprehensive overview of the light and medium Panzers in action was compiled by Emmy Award winning historian Bob Carruthers. It draws heavily on war-time intelligence reports to produce a fascinating insight into the development and combat history of the Panzer I, II, III and IV at the tactical and operational level. Also featured are rare developments such as the flame thrower variant alongside unpublished photographs and illustrations which provide an absorbing study, from an array of primary sources, of the world of the Panzers and their crews from contemporary Allied sources, which conveys to the modern reader a vivid sense of how they were viewed at the time.
This book is part of the 'Hitler's War Machine' series, a new military history range compiled and edited by Emmy Award winning author and historian Bob Carruthers. The series draws on primary sources and contemporary documents to provide a new insight into the true nature of Hitler's Wehrmacht. The series consultant is David Mcwhinnie creator of the award winning PBS series 'Battlefield'.