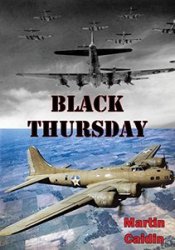 Author: Martin Caidin
Black Thursday [Illustrated Edition]
Pickle Partners Publishing
ISBN: 0553135821
2014
Format: EPUB
Size: 3,4 МБ
Language: English
Pages: 304
Includes 15 photographs, 23 drawings and 2 maps
The battle fought on Black Thursday stands high in the history of American fighting men. It will be long remembered, like the immortal struggles of Gettysburg, St. Mihiel and the Argonne, of Midway and the Bulge and Pork Chop Hill. Tens of thousands of our airmen fought in desperate battles in the sky during World War II. From China to the Aleutians, from Australia through the Philippines and across the Southwest Pacific, through the Central Pacific, in Africa and the Mediterranean, and across the length and breadth of Europe, American fliers engaged in combat with the Germans, the Japanese, the Italians.
In all these battles one stands out among all the others for unprecedented fury, for losses suffered, for courage. This was the battle on Black Thursday, Mission 115 of the VIII Bomber Command from bases in England to the savagely defended German city of Schweinfurt. It was a battle in which we suffered unprecedented losses, and a battle that we cannot in honesty remember as having produced the results we had hoped for, or that hurt the enemy’s war effort as much as we had believed.
Yet it is an aerial struggle remembered with great pride, for it demanded the utmost in courage, in skill, in carrying on the fight in the face of bloody slaughter. All these things, and more, make up the story of Black Thursday, of this book.