How the War was Won: Air-Sea Power and Allied Victory in World War II 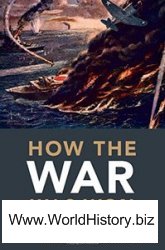 Author: Dr Phillips Payson O'Brien
How the War was Won: Air-Sea Power and Allied Victory in World War II
Cambridge University Press
ISBN: 1107014751
2015
Format: PDF
Size: 8,7 МБ
Language: English
Pages: 640
World War II is usually seen as a titanic land battle, decided by mass armies, most importantly those on the Eastern Front. Phillips Payson O'Brien shows us the war in a completely different light. In this compelling new history of the Allied path to victory, he argues that in terms of production, technology and economic power, the war was far more a contest of air and sea than land supremacy. He shows how the Allies developed a predominance of air and sea power which put unbearable pressure on Germany and Japan's entire war-fighting machine from Europe and the Mediterranean to the Pacific. Air and sea power dramatically expanded the area of battle and allowed the Allies to destroy over half the Axis' equipment before it had even reached the traditional 'battlefield'. Battles such as El Alamein, Stalingrad and Kursk did not win World War II; air and sea power did.