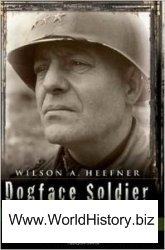 Author: Wilson A. Heefner
Dogface Soldier: The Life of General Lucian K. Truscott, Jr
University of Missouri
ISBN: 0826218822
2010
Format: PDF
Size: 7,4 МБ
Language: English
Pages: 400
On July 11, 1943, General Lucian Truscott received the Army's second-highest decoration, the Distinguished Service Cross, for valor in action in Sicily. During his career he also received the Army Distinguished Service Medal with Oak Leaf Cluster, the Navy Distinguished Service Medal, the Legion of Merit, and the Purple Heart. Truscott was one of the most significant of all U.S. Army generals in World War II, pioneering new combat training methods—including the famous “Truscott Trot”— and excelling as a combat commander, turning the Third Infantry Division into one of the finest divisions in the U.S. Army. He was instrumental in winning many of the most important battles of the war, participating in the invasions of North Africa, Sicily, Anzio, and southern France. Truscott was not only respected by his peers and “dogfaces”—common soldiers—alike but also ranked by President Eisenhower as second only to Patton, whose command he took over on October 8, 1945, and led until April 1946.
Yet no definitive history of his life has been compiled. Wilson Heefner corrects that with the first authoritative biography of this distinguished American military leader. Heefner has undertaken impressive research in primary sources—as well as interviews with family members and former associates—to shed new light on this overlooked hero. He presents Truscott as a soldier who was shaped by his upbringing, civilian and military education, family life, friendships, and evolving experiences as a commander both in and out of combat.