Behind Hitler's Lines: The True Story of the Only Soldier to Fight for both America and the Soviet Union in World War II 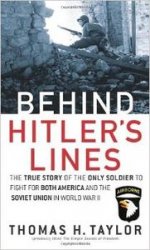 Author: Thomas H. Taylor
Behind Hitler's Lines: The True Story of the Only Soldier to Fight for both America and the Soviet Union in World War II
Presidio Press
ISBN: 0891418458
2004
Format: EPUB
Size: 4,2 МБ
Language: English
Pages: 368
As the twentieth century closed, the veterans of its defining war passed away at a rate of a thousand per day. Fortunately, D-Day paratrooper Joseph Beyrle met author Thomas H. Taylor in time to record Behind Hitler's Lines, the true story of the first American paratrooper to land in Normandy and the only soldier to fight for both the United States and the Soviet Union against Nazi Germany. It is a story of battle, followed by a succession of captures, escapes, recaptures, and re-escapes, then battle once more, in the final months of fighting on the Eastern Front. For these unique experiences, both President Bill Clinton and President Boris Yeltsin honored Joe Beyrle on the fiftieth anniversary of V-E Day. Beyrle did not strive to be a part of history, but history kept visiting him. Twice before the invasion he parachuted into Normandy, bearing gold for the French resistance. D Day resulted in his capture, and he was mistaken for a German line-crosser - a soldier who had, in fact, died in the attempt. Eventually Joe was held under guard at the American embassy in Moscow, suspected of being a Nazi assassin. Fingerprints saved him, confirming that he'd been wounded five times, and that he bore a safe-conduct pass written by marshal Zhukov after the Wehrmacht wrested Joe, at gunpoint, from execution by the Gestapo. In the ruins of Warsaw his life was saved again, this time by Polish nuns. Some of Joe's story is in his own words - a voice that will be among the last and best we hear firsthand from World War II.