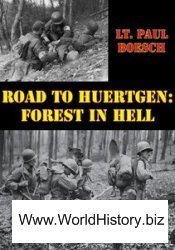 Author: Lt. Paul Boesch
Road to Huertgen Forest In Hell [Illustrated Edition]
Pickle Partners Publishing
ISBN: 1497434475
2014
Format: EPUB
Size: 7,9 МБ
Language: English
Pages: 246
Road to Huertgen—Forest in Hell, originally published in 1962, chronicles the 1944 combat experiences of U.S. Army Lieutenant Paul Boesch. The setting is the Huertgen Forest, a 1,300 square mile, densely wooded, hilly region along the German-Belgian border south and southeast of Aachen. From mid-September to mid-December 1944, six American infantry divisions—the 1st, 4th, 8th, 9th, 28th, and 83d—and part of the 5th Armored Division fought at one time or another in the Huertgen Forest. These divisions incurred 28,000 casualties, including 8,000 due to combat exhaustion and rain, mud, sleet, and cold.
The forest lay across the path the First U.S. Army had to take to reach the Rhine River, and thus American commanders considered it essential to conquer it. German troops had prepared an elaborate defense of Huertgen, resulting in a struggle where tanks, infantry, and artillery dueled at close range. The battle for the forest ended in December, when a sudden German offensive through the Ardennes to the south forced the Allied armies to fall back, regroup, and renew their attack. By the time both American and German artillery had done with it, the setting would resemble the Argonne battlefield of World War One—a bleak scene of near total devastation. Included are 16 pages of maps and photographs.