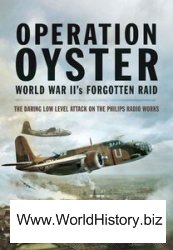 Author: Kees Rijken
Operation Oyster WW II's Forgotten Raid The Daring Low Level Attack on the Philips Radio Works
Pen and Sword
ISBN: 1473821096
2014
Format: EPUB + PDF (conv)
Size: 4,3 МБ + 16,5 МБ
Language: English
Pages: 256
Operation Oyster was carried out on the 6th December, 1942 by 2 Group RAF. Considered to be a notable success for the allies, it cost the Germans an estimated six months of lost production time at a critical point in the conflict. It is arguable, according to the authors, that the operation was in fact rather more significant than Operation Chastise, the Dambuster raid, while accepting that was a remarkable feat of arms. Operation Oyster struck at the very heart of what Churchill termed 'the wizard war' against German radio navigational technology by attacking a central hub of activity; the Philips Radio Works in Eindhoven, The Netherlands.
The development of electronics in WWII was the most significant technical aspect of weaponry over the course of the conflict. On both sides, there were great advances in radar and communications which, at that time, depended on the wide- scale use of high frequency radio valves – few companies had the technology to produce these, but the leading one in Europe was Philips in Eindhoven. Thus it was determined that Philips was the most important target.
Ninety-three allied aircraft took part and a total of fourteen were lost. But the result in terms of damages to the enemy was considerable, hindering the German war effort significantly and consequently aiding the allies. Despite these facts however, the story of the raid has been underreported, and the efforts of the aircrew who took part have been little recognized. By comparison, the Dambuster raid which came six months later has entered into folklore. Here, for the first time, the overlooked Oyster raid is afforded the attention it deserves.