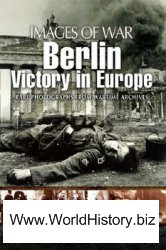 In April and May 1945 the city of Berlin was the site of the final destructive act of the Second World War in Europe. The German capital became a battleground. After three weeks of ruthless fighting against a desperate, sometimes suicidal, defense, the Red Army took the city and crushed the last remaining German armies in the East. This momentous battle and the elaborate preparations for it were recorded in graphic detail by photographers whose images have come down to us today. These images, which give us an unforgettable glimpse into the grim reality of mid-twentieth-century warfare, are the raw material of Nik Cornish's evocative book.