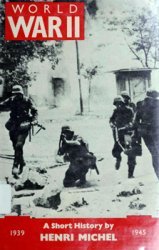 World War II, written by one of the world's greatest acknowledged experts on the subject, succeeds in encompassing for the first time within a single volume the entire scale of the Second World War, covering principal events and personalities, fluently narrating its course from 1939 to the immediate postwar period and presenting a lucid account of the all-important political background. In addition, Henri Michel gives a clear picture of the aftermath of the war and indicates the almost cataclysmic influence it had on political boundaries and postwar technology. Maps and photographs further reinforce the clarity of the author's approach.