Kriegsmarine: The Illustrated History of the German Navy in World War II 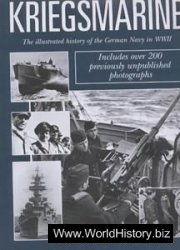 Author: Robert Jackson
Kriegsmarine: The Illustrated History of the German Navy in World War II
Aurum Press
ISBN: 1854107461
2001
Format: PDF
Size: 40,9 МБ
Language: English
Pages: 176
Germany lost her entire navy at the end of the First World War, yet by 1939, under the leadership of Admiral Erich Raeder, she had built a small but formidable fleet of modern surface vessels, including battleships, battle cruisers and three vessels of an entirely new class, the pocket battleships, as well as cruisers and destroyers. At the same time, Karl DVnitz had rebuilt the U-boat force and equipped it with a new concept, the wolfpack tactic, that would come near to defeating the Allied convoy system over the following four years.