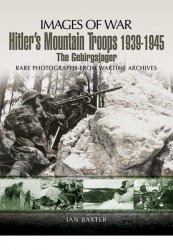 Hitler's mountain troops or Gebirgsjager were a group of elite soldiers ready for battle, whatever the conditions. These mountain men were trained to ski, climb and endure long marches, survive appalling conditions and were given a role as crack shock troops. Yet many of the campaigns in which the Gebirgsjager fought were on level ground where they had little opportunity to demonstrate their unique skills. Instead, they were invariably employed as assault infantry in conventional battle, a role in which every individual trooper excelled, but not one for which they had been trained. They fought in virtually all theatres of World War, notably on the Eastern Front, where operations took them into the Caucasus. The Gebirgsjager were proud to wear the Edelweiss, the famous badge that set them apart and distinguished them as Hitler's mountain men.