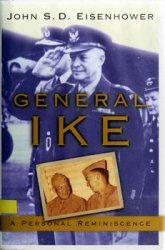 Dwight D. Eisenhower had two careers: before he was one of America's most popular presidents, he was its greatest military commander. His military career lasted much longer, and (according to John) it was far more important to him personally. Nobody is in a better position to tell the story of General Ike than John, who was by his side for much of it, and who rose to the rank of Brigadier General before retiring to write seminal and bestselling works of military history. GENERAL IKE is a definitive, revealing, and brilliantly crafted study of the right stuff of leadership. Great leaders bring out the best in the people around them, and Ike was no exception. Drawing on scenes witnessed by few others, and comments given him in private by his father, John Eisenhower shows how his father's keen mind, great sense of the strengths of others, and perseverance in the face of all duties combined to bring America to victory.