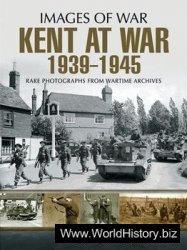 Following on from Blitz on Kent, all aspects of life during the Second World War were experienced during in this embattled county. From the onset of the war Kent became a key part in the front line defence of Britain. Defences were built, and the Home Guard formed. With the threat of invasion receding, the county took part in the great offensive against Nazi Germany. Preparations and training took place that lead to the D-Day invasion in June 1944 and ultimate victory in 1945.