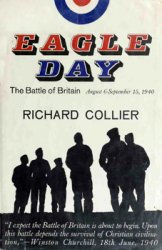 August 13, 1940 — Eagle Day - was the day chosen by Hermann Goring, Air Marshal of Hitler's Luftwaffe, to launch a crushing air attack which would annihilate the Royal Air Force and prepare the way for Nazi Germany's invasion of Britain. With this abortive attack, the Battle of Britain began, a battle in which a few hundred men and airplanes (many of which were obsolete) struggled against staggering odds, against fear, fatigue and desperation, to turn the tide against Germany. It was this battle which moved Churchill to say, "Never in the field of human conflict has so much been owed by so many to so few."