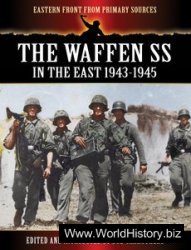 This is the illustrated history of the Waffen SS on the Eastern Front. The life and death of the Waffen SS can be traced in the surviving photographs, and the brooding saga of the decline from triumph into disaster is told through these powerful images which clearly document the reality of combat on the Russian Front. From 1943 to 1945 the Waffen SS in the East were engaged in a long and bloody retreat against a numerically far superior enemy. As they fell back across the vast plains of the Soviet Union, Poland, Hungary and ultimately Germany itself, death or ignominious defeat at the hands of the Red Army became their fate. But the Waffen SS, true to their character, fought a fanatical rearguard action to the end. In the process they showed utterly heroic if increasingly futile acts of bravery against overwhelming odds. These events are encapsulated in this excellent selection of evocative images introduced and described by historian and author Nicholas Milton. Essential reading for anyone with an interest in the course of the war in the East and the role played by the Waffen SS.