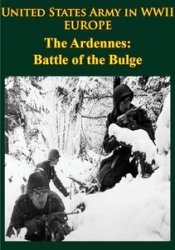 Author: Hugh M. Cole
United States Army in WWII - Europe - The Ardennes Battle of the Bulge [Illustrated Edition]
Pickle Partners Publishing
ISBN: 0794837700
2013
Format: EPUB
Size: 5,7 МБ
Language: English
Pages: 572
The Ardennes: Battle of the Bulge treats the German winter counteroffensive in Belgium and Luxembourg. The volume covers the operations of the U.S. First and Third Armies from the start on December 16, 1944, to January 3, 1945, when successful elimination of the 'bulge' was assured. The Ardennes focuses on the division as the chief tactical and administrative unit. However, in the early hours and first days the battle mandates that the story be told at platoon and company level with cross reference to battalions, regimental combat teams, and armored combat commands. Command and control exercised by the army corps generally appears in the allocation of reserves rather than in tactical direction of the battle. Higher command efforts come into the narrative in a few specific instances, such as the gross failure of Allied intelligence; the geographic division of command between Montgomery and Bradley; the decisions to hold the American linchpins on the Elsenborn ridge, St. Vith, and Bastogne, at the shoulders of the German salient; and the initial large-scale counterattack mounted by the Third Army. The history of German command and troop operations is told in considerable detail. At the close of World War II, German officers were brought together so as to re-create the commands and general staffs of the major units taking part in the Ardennes campaign. As a result of this exercise in collective memory of The Ardennes has an unmatched wealth of precise and parallel information on 'the other side of the hill'. Much attention is also given to the role played by the Allied air forces-particularly the tactical air commands-and to the effect of weather on air-ground cooperation and on German logistics.