Hitler in Argentina: The Documented Truth of Hitler's Escape from Berlin (The Hitler Escape Trilogy) 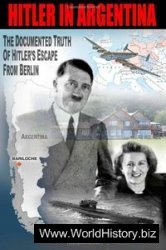 Author: Harry Cooper
Hitler in Argentina: The Documented Truth of Hitler's Escape from Berlin (The Hitler Escape Trilogy)
CreateSpace Independent Publishing Platform
ISBN: 1495936066
2014
Format: EPUB
Size: 13,6 МБ
Language: English
Pages: 302
Who said that Hitler did not die in the bunker in April 1945? Josef Stalin told President Harry Truman that Hitler did not. Marshall Zhukov said "We have found no corpse that could be Hitler's." This book not only tells of the escape of Adolf Hitler, Eva Braun and others of the Third Reich; it includes photographs, files from the FBI, CIA and OSS that show the US knew they escaped, interviews and much more. You will also read the reason that no government went after Hitler even though they knew where he was. This book will change the history you were taught in 5th grade.