Armoured Warfare and the Fall of France (Images of War) 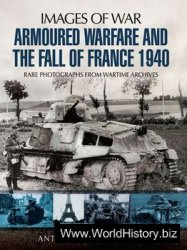 At 21:00 on 9 May 1940 Codeword Danzig was issued alerting Adolf Hitler’s airborne troops that they were about to spearhead an attack on Belgium and the Netherlands. The following day his blitzkrieg rolled forward striking the British Expeditionary Force and the French armies in Belgium and in northern France at Sedan.