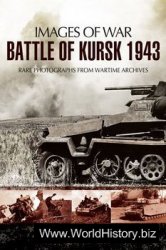 The greatest tank battle in world history, known as Operation CITADEL, opened during the early hours of 5 July 1943, and its outcome was to decide the eventual outcome of the war on the Eastern Front. Images of War - Battle of Kursk 1943, is an illustrated account of this pivotal battle of the war on the Eastern Front, when the Germans threw 900,000 men and 2,500 tanks against 1,300,000 soldiers and 3,000 tanks of the Red Army in a savage battle of attrition.