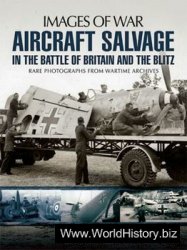 Aircraft Salvage in the Battle of Britain and Blitz will comprise of some 140-150 images of the work of RAF and civilian salvage squads during the Battle of Britain, the Blitz and beyond. The images will depict losses across Britain, both RAF and German, during this period. Each picture will tell its own story, and will be fully captioned with historical detail. The author will be covering a topic that has rarely been examined in this detail.