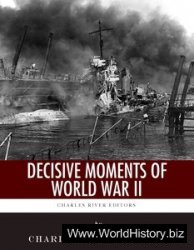 Author: Charles River Editors
Decisive Moments of World War II: The Battle of Britain, Pearl Harbor, D-Day and the Manhattan Project
Amazon Digital Services
ISBN: 1492936391
2013
Format: EPUB
Size: 3.3 МБ
Language: English
Pages: 156
During World War II, the free world literally hung in the balance, with the Axis and Allies engaging in warfare on an unprecedented scale. Though the ultimate result is now known, in 1940 it looked very much like the Axis might win the war and usher in a new world order.
Comprehensively covers 4 key turning points in World War II.
Includes pictures of important people, places, and events.
Includes an original introduction for each decisive moment.
Includes bibliographies for further reading.
Explains what went right and what went wrong for the combatants at Pearl Harbor, D-Day and the Battle of Britain.
It took several important decisive moments to help turn the war. The Battle of Britain, fought throughout the summer and early autumn of 1940, was unquestionably epic in scope. The largest air campaign in history at the time, the vaunted Nazi Luftwaffe sought to smash the RAF as a prelude to German invasion, leaving the British public and its pilots engaged in what they believed was a desperate fight for national survival. That’s what it looked like to the rest of the world too, as free men everywhere held their breaths. Could these pilots, many not yet old enough to shave, avoid the fate of Poland and France? The fate of the free world, at least as Europe knew it, hung in the balance over the skies of Britain during those tense months.